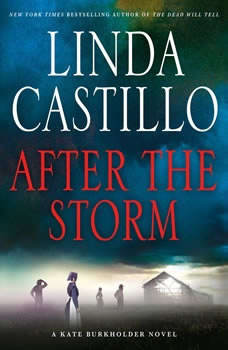 After the Storm: A Kate Burkholder Novel

In this electrifying thriller by New York Times bestseller Linda Castillo, Kate Burkholder must uncover a family's long-hidden past to solve a brutal murderWhen a tornado tears through Painters Mill and unearths human remains, Chief of Police Kate Burkholder finds herself tasked with the responsibility of identifying the bones—and notifying the family. Evidence quickly emerges that the death was no accident and Kate finds herself plunged into a thirty year old case that takes her deep into the Amish community to which she once belonged. Meanwhile, turmoil of an emotional and personal nature strikes at the very heart of Kate's budding relationship with state agent John Tomasetti. A reality that strains their fragile new love to the breaking point and threatens the refuge they've built for themselves—and their future. Under siege from an unknown assailant—and her own personal demons—Kate digs deep into the case only to discover proof of an unimaginable atrocity, a plethora of family secrets and the lengths to which people will go to protect their own.

As a detective lieutenant with the LAPD, Peter Decker witnessed enough ugliness and chaos for a lifetime. Now, he and his spirited wife Rina Lazarus are ready to enjoy the quiet beauty of upstate New York, where they can be closer to their four adu...

The Dead Will Tell
by Linda Castillo

Everyone in Painters Mill knows the abandoned Hochstetler farm is haunted. But only a handful of the residents remember the terrible secrets lost in the muted/hushed whispers of time—and now death is stalking them, seemingly from the grave. On...

Live to Tell
by Lisa Gardner

Linda Castillo's bestselling series has been called "gripping" [People] and "impossible to put down" [Bookpage] and the "teeth chattering suspense" [USA Today] continues with GONE MISSING—a deeply chilling novel about a rite of passage gone ho...

Her Last Breath
by Linda Castillo

An extraordinarily beautiful Amish woman, a dangerous femme fatale, is the central figure in Linda Castillo's Her Last Breath, a story that reveals a dark side of Painters Mill and its seemingly perfect Amish world.A rainy night, an Amish father ret...

Day of Atonement
by Faye Kellerman

Peter Decker of the L.A.P.D. never dreamed he'd be spending his honeymoon with his new wife, Rina Lazarus, in an Orthodox Jewish enclave in Brooklyn, New York—or that a terrible event would end it so abruptly. But a boy has vanished from the ...