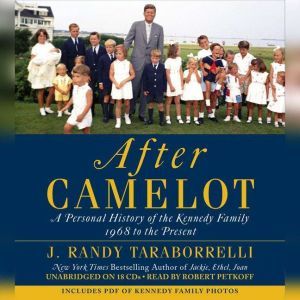 After Camelot: A Personal History of the Kennedy Family--1968 to the Present

For more than half a century, Americans have been captivated by the Kennedys - their joy and heartbreak, tragedy and triumph, the dark side and the remarkable achievements. In this ambitious and sweeping account, Taraborelli continues the family chronicle begun with his bestselling Jackie, Ethel, Joan and provides a behind-the-scenes look at the years "after Camelot." He describes the challenges Bobby's children faced as they grew into adulthood; Eunice and Sargent Shriver's remarkable philanthropic work; the emotional turmoil Jackie faced after JFK's murder and the complexities of her eventual marriage to Aristotle Onassis; the the sudden death of JFK JR; and the stoicism and grace of his sister Caroline. He also brings into clear focus the complex and intriguing story of Edward "Teddy" and shows how he influenced the sensibilities of the next generation and challenged them to uphold the Kennedy name. Based on extensive research, including hundreds of exclusive interviews, After Camelot captures the wealth, glamour, and fortitude for which the Kennedys are so well known. With this book, J. Randy Taraborrelli takes readers on an epic journey as he unfolds the ongoing saga of the nation's most famous-and controversial-family.