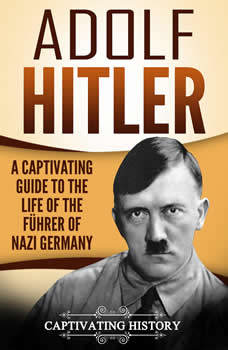 Adolf Hitler: A Captivating Guide to the Life of the Fuhrer of Nazi Germany

Explore the rise of Adolf Hitler.

Was Hitler, as Ian Kershaw asked, a natural consequence of German history, or an aberration? Not that Hitler had been in hiding, waiting to attack. The Fuhrer had actually been following an aggressive and savage foreign policy for almost 10 years, and been named Man of the Year by Time magazine in 1938.

This is not an audiobook about World War II, but about the man, Adolf Hitler, one of the faces and names that still arouse the strongest feelings - repulsion, resentment, and even fanaticism - but one who also had a childhood and a youth, a father and a mother. It is the road to madness - beginning that day in August of 1934 when he took over absolute power and ordered allegiance and loyalty to him alone - that this book is about.

Listen to the audiobook now to learn more!