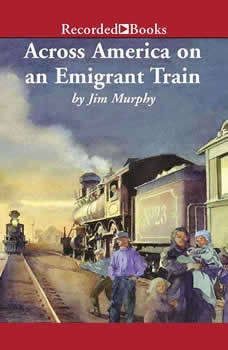 Across America on an Emigrant Train

In the summer of 1879, the young writer Robert Louis Stevenson received a telegram from America. Fanny, a dear friend in California, was ill. Stevenson packed his bags and left his home in Scotland. When the steamer reached the east coast of America, his journey had just begun. Stevenson had little money, so he traveled across America the cheapest way: he went by train. The trip from New York to Monterey, California, would take two exciting weeks. As the train chugged up mountains, through Indian territory, and over trestle bridges, Stevenson recorded his impressions of the rough, vast country and the people he met. Jim Murphy weaves a lively account of Stevenson's journey with fascinating glimpses of the construction of the transcontinental railroad. It is a vivid introduction to one of the most important chapters in the history of the American West. Richard M. Davidson's compelling narration makes the personal journey and the historical information truly accessible to young listeners.

From Steve Sheinkin, the award-winning author of The Port Chicago 50 and Bomb comes a tense, exciting exploration of what the Times deemed "the greatest story of the century": how Daniel Ellsberg transformed from obscure government analyst into "the...

On the day that shocks the world, one boy just wants to find his family. A powerful addition to the gripping I SURVIVED series. The only thing Lucas loves more than football is his Uncle Benny, his dad's best friend at the fire department where th...

The Great Fire
by Jim Murphy

The Great Fire of 1871 was one of the most colossal disasters in American history-with damage so profound that few people believed the city of Chicago could ever rise again. By weaving personal accounts of actual survivors together with careful rese...

I Survived #02: I Survived the Shark Attacks of 1916
by Lauren Tarshis

In the summer of 1916, ten year-old Chet Roscow is captivated by the local news: a Great White shark has been attacking and killing people up and down the Atlantic Coast, not far from Chet's hometown of Springfield, New Jersey. Then one day, swimmin...

I Survived #03: I Survived Hurricane Katrina, 2005
by Lauren Tarshis

The storm of the centuryand the survival story of a lifetime! Its the end of August 2005, and a big hurricane is blowing in to New Orleans, Louisiana. Barrys family plans to evacuate the Ninth Ward with everyone else, but when Barrys little sister...

In December of 1938, a chemist in a German laboratory made a shocking discovery: When placed next to radioactive material, a Uranium atom split in two. That simple discovery launched a scientific race that spanned 3 continents. In Great Britain and ...