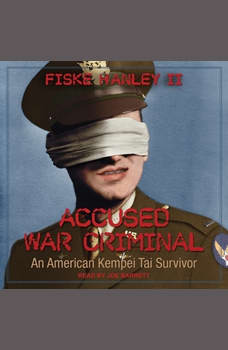 A WWII Air Force Cadet shares his incredible story of serving his country and being shot down over Japan in this vivid POW memoir. The day after Fisk Hanley graduated from Texas Technical College, in May of 1943, he boarded a train for Boca Raton, Florida, where he would begin his training as an Air Force Aviation Cadet. Like so many other young men that year, Hanley had been drafted to serve the United States in the Second World War. Assigned to the 504th Bombardment Group in the Pacific Theater, Hanley became a flight engineer on a B-29 bomber squad. On his seventh mission, he and his crew were shot down over Japan. In Accused War Criminal, Hanley shares his experiences from his training and commissioning to his deployment on a failed mission that led to his capture. He recounts how he managed to survive as a prisoner of war until his eventual rescue and recovery. With candid honesty and telling details, this is a humbling and harrowing tale of one man's bravery under unimaginable circumstances.