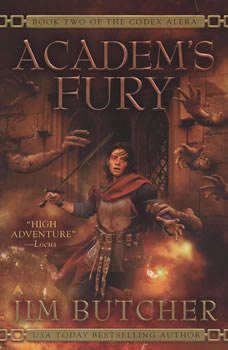 In Furies of Calderon, #1 New York Times bestselling author Jim Butcher introduced readers to a world where the forces of nature take physical form. But now, it is human nature that threatens to throw the realm into chaos…

For centuries, the people of Alera have harnessed the furies—elementals of earth, air, fire, water, wood, and metal—to protect their land from aggressors. But no fury can save them from the dangers they face within. A mysterious attack from across the sea has weakened the First Lord. Should he fall, a bloody civil war is inevitable. The responsibility of fending off assassination attempts and treachery within the First Lord’s circle of spies falls on Tavi, the one man with no fury to call...