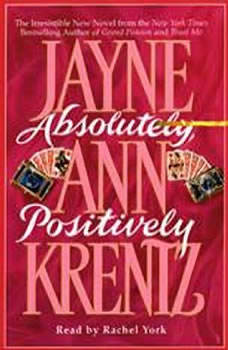 The brightest, sexiest romance yet from the New York Times Bestselling author of Grand Passion and Trust Me.Unconventional Molly Abberwick, trustee of her late father's scientific foundation, is mad enough to fire her new consultant, Dr. Harry Trevelyan. A brilliant expert on new inventions, the handsome Harry irritates Molly to no end with his preposterous insistence that they have an affair -- and that it could be planned, predicted, and run like a science project. But just when Molly is ready to let him have a piece of her mind -- not her heart -- she discovers that the eminent Dr. Trevelyan is not what he seems.First, there is his family, a long line of carnival folk who run the Smoke &amp; Mirrors Amusement Company. Then there are the paranormal premonitions which bring Harry to Molly's side when she most needs him. And when her troubles escalate into violence and a mysterious stalker threatens her life, Molly turns to Harry's sixth sense for help, and discovers she needs Harry not just for a week, or for an hour, but forever in love.A sparkling new love story, Krentz works her magic once more for an Absolutely, Positively wonderful new romance!The irresistible new novel from the New York Times bestselling author of Grand Passion and Trust Me.

JAYNE ANN KRENTZ'S BLOCKBUSTER BESTSELLER AT A NEW LOW PRICE! Flash Read by Barbara Garrick Olivia Chantry may keep her desk in disarray, but she's a dynamo when it comes to business; her Seattle-based company -- Light Fantastic -- organizes dazzl...

Michelle Cabot has inherited her father's Florida cattle ranch, and a mountain of debt. To make matters worse, a huge chunk of that debt is owed to the neighboring rancher, her nemesis John Rafferty. Nothing shocks Rafferty more than discovering tha...