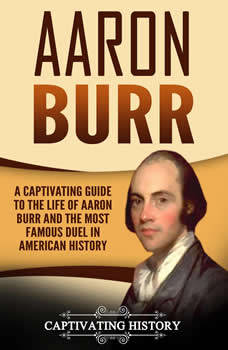 Aaron Burr: A Captivating Guide to the Life of Aaron Burr and the Most Famous Duel in American History

Explore the captivating life of Aaron Burr and his duel with Alexander Hamilton.

Based on his early achievements, Aaron Burr, Jr., should have become an obscure but respected figure in American history. An officer in the Continental Army, a high-flying lawyer, and an influential politician, his career peak was becoming the third vice president in US history.

But after all these achievements, Burr's name is now associated with corruption and cruelty. He killed a man in an illegal duel while in office, and interest in that man, Alexander Hamilton, has revived Burr's reputation as one of history's villains. It was a reputation earned not just through the duel, in which he killed one of the brightest lights in the political firmament, but through a treasonous conspiracy after leaving the vice presidency.

Who was Aaron Burr? What drove him to such achievements and such failures? And how did a respected politician become a publicly reviled villain? Pick up this audiobook now to find out.

This audiobook covers Aaron Burr as:

Get the audiobook now and learn more about Aaron Burr!