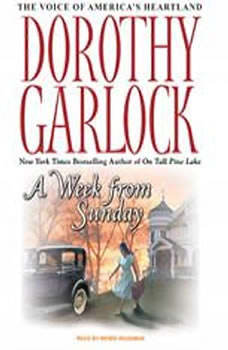 A Week from Sunday

Adrianna Moore has just had a double shock: the death of her father and the discovery that he has left his entire estate to his lawyer. The lawyer, a repulsive social climber, tells her that to regain her inheritance, she must marry him "a week from Sunday." Adrianna takes off, driving desperately to a new life. Caught in a violent rainstorm, she collides with an oncoming truck. Quinn Baxter, the driver of the truck, demands repayment for his lost cargo. They reach a bargain: she will live in his home, tutor his bedridden younger brother, and play piano in Quinn's tavern to pay off her debt. Drawn to the rugged Quinn and challenged by the interaction with the tavern patrons, she also must deal with an intractable foe—Quinn's housekeeper, who is scheming to become his wife. All the while, the spurned lawyer is following Adrianna's trail, determined to find her and force her to marry him.

The cheesey voices, the overdramatic nuances, I've never been so annoyed by a book on CD!

The main character's a scared little timid mouse, the narrator reads so amazingly slow and if I hadn't had nothing else to listen to I wouldn't have even finished the stupid thing. Not one of my favorites.

Couldn't get into the voices that much. I am from the South and family very much Cajun, however the book was not all that good and i quite new what was going to happen before it happened. Was not very good at all.