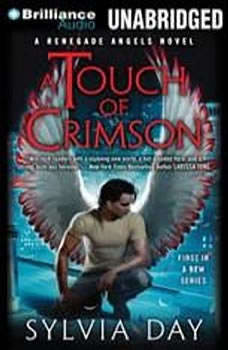 A Touch of Crimson

An angel with immense power and insatiable desire, Adrian Mitchell leads an elite Special Ops unit of the seraphim. His task is to punish the Fallen — angels who have become vampires — and command a restless pack of indentured lycans. But Adrian has suffered his own punishment for becoming involved with mortals — losing the woman he loves again and again. Now, after nearly two hundred years, he has found her: Shadoe, her soul once more inhabiting a new body that doesn’t remember him. This time he won’t let her go. With no memory of her past as Shadoe, Lindsay Gibson knows only that she can’t help being fiercely attracted to the smoldering, seductive male who crosses her path. Swept into a dangerous world of tumultuous passion and preternatural conflict, Lindsay is soon caught between her angel lover, her vampire father, and a full-blown lycan revolt. There’s more at stake than her love and her life — she could lose her very soul.... “Explodes with passion and heat. A hot, sexy angel to die for and a gutsy heroine make for one exciting read.” — New York Times Bestselling Author Cheyenne McCray “Sylvia Day spins a gorgeous adventure that combines gritty, exciting storytelling with soaring lyricism. Adrian is my favorite kind of hero — an alpha male angel determined to win the heart of his heroine, Lindsay, while protecting her from his lethal enemy....This is definitely a book for your keeper shelf.” — New York Times Bestselling Author Angela Knight