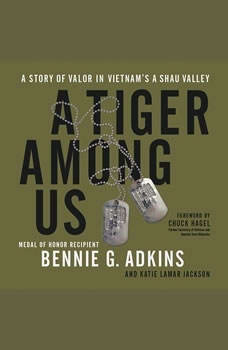 A Tiger among Us: A Story of Valor in Vietnam's A Shau Valley

Foreword by Chuck Hagel, former Secretary of Defense and Senator from NebraskaAdaptable. Cunning. Ferocious. Fearless. The Indochinese tiger is just one of the formidable predators roaming Vietnam's jungle. In 1966 a small band of US Special Forces soldiers--most especially Bennie Adkins--spent four grueling days facing down the "tiger" among them.While the rain and mist of an early March moved over the valley, then-Sergeant First Class Bennie Adkins and sixteen other Green Berets found themselves holed up in an undermanned and unfortified position at Camp A Shau, a small training and reconnaissance camp located right next to the infamous Ho Chi Minh Trail, North Vietnam's major supply route. And with the rain came the North Vietnamese Army in force.Surrounded 10-to-1, the Green Berets endured constant mortar and rifle fire, direct assaults, treasonous allies, and volatile jungle weather. But there was one among them who battled ferociously, like a tiger, and when they finally evacuated, he carried the wounded to safety. Forty-eight years later, Command Sergeant Major Bennie Adkins's valor was recognized when he received this nation's highest military award, the Medal of Honor.Filled with the sights, smells, and sounds of a raging battle fought in the middle of a tropical forest, A Tiger among Us is a riveting tale of bravery, valor, skill, and resilience.

25th ANNIVERSARY EDITION. One of the most acclaimed books of our time—the definitive Vietnam War exposé.Winner of the Pulitzer Prize and the National Book Award.When he came to Vietnam in 1962, Lieutenant Colonel John Paul Vann was the ...

John Plaster’s riveting account of his covert activities as a member of a special operations team during the Vietnam War is “a true insider’s account, this eye-opening report will leave readers feeling as if they’ve been give...

In February 1966, U.S. Navy pilot Dieter Dengler was shot down over "neutral Laos." He crashed deep in territory controlled by North Vietnamese army regulars and the communist Pathet Lao, who would eventually capture him and hold him prisoner in a f...

An absorbing and definitive modern history of the Vietnam War from the acclaimed New York Times bestselling author of The Secret War.Vietnam became the Western world’s most divisive modern conflict, precipitating a battlefield humiliation for...

David Halberstam’s masterpiece, the defining history of the making of the Vietnam tragedy, with a new Foreword by Senator John McCain.Using portraits of America’s flawed policy makers and accounts of the forces that drove them, The Best ...

Sometimes you do everything right, but it just isn't your day. A part fails and your helicopter comes apart in flight, or, another aircraft runs into you and the pieces of both fall to the ground below, or the enemy gunner pulls the trigger at just ...

David Halberstam’s masterpiece, the defining history of the making of the Vietnam tragedy, with a new Foreword by Senator John McCain.Using portraits of America’s flawed policy makers and accounts of the forces that drove them, The Best ...

Most history-minded Americans have discussed the Vietnam War, becoming familiar, at the very least, with the names of such pivotal events as the Siege of Khe Sanh, the Tet Offensive, and the Fall of Saigon. But to grasp the full impact of this agoni...