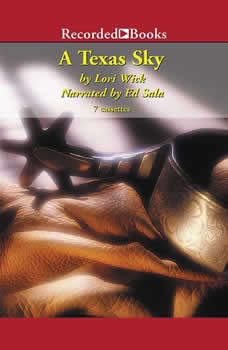 With over two million copies of her books in print, Lori Wick consistently tops the Christian best-selling fiction lists. Delighting fans with her versatility, she transports readers sometimes to Victorian England, sometimes to the American frontier, and always into the minds and hearts of her characters. In the summer of 1882, Dakota Rawlings, Texas Ranger, is still recuperating from an ambush that nearly killed him. Not yet fit for duty, the bored ranger eagerly accepts the opportunity to escort his boss' beautiful daughter, Darvi, to the train station in Aurora. The trip won't be difficult, and he'll get to share his newly found faith with her. But Darvi is kidnapped from the train and held hostage, and Dakota must singlehandedly solve the mystery of her disappearance and stage a daring rescue. Surrounded by a world of shady quests for money and power, Darvi and Dakota inspire listeners with their burgeoning love and faith. Ed Sala's expert narration evokes a sense of nostalgia as he brings this fragment of the old Wild West to life.

The Proposal
by Lori Wick

Acclaimed, best-selling author Lori Wick's The Proposal is a moving tale of Christ's love at work in early 19th-century London. William Jennings is not married and likes it that way. But when a relative passes away, he is suddenly guardian of three ...

In the late 1800s, the adventurous Reagan Sullivan leaves the bustle of New York City and moves to the wide open spaces of Texas, to work as a nanny. Fiercely independent and headstrong, she trusts no man - not even God. But when Reagan meets Cash R...

Every Little Thing About You
Yellow Rose Mysteries #2