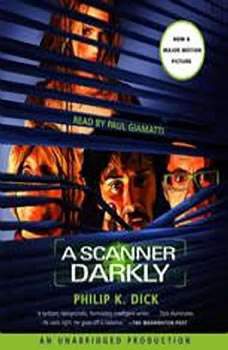 Bob Arctor is a dealer of the lethally addictive drug Substance D. Fred is the police agent assigned to tail and eventually bust him. To do so, Fred takes on the identity of a drug dealer named Bob Arctor. And since Substance D--which Arctor takes in massive doses--gradually splits the user's brain into two distinct, combative entities, Fred doesn't realize he is narcing on himself.

Caustically funny, eerily accurate in its depiction of junkies, scam artists, and the walking brain-dead, Philip K. Dick's industrial-grade stress test of identity is as unnerving as it is enthralling.

The story of The First Formic War continues in Earth Awakens.Nearly 100 years before the events of Orson Scott Card's bestselling novel Ender's Game, humans were just beginning to step off Earth and out into the Solar System. A thin web of ships in ...

By Heresies Distressed
by David Weber

In David Weber's By Heresies Distressed, the battle for the soul of the planet Safehold has begun.The Kingdom of Charis and the Kingdom of Chisholm have joined together, pledged to stand against the tyranny of a corrupt Church. The youthful Queen Sh...

We are not alone. Millions of people are confronting aliens that authorities say do not exist.Meet the Three Thieves, a group of Grays assigned to duty in a small Kentucky town. They have been preparing a child for generations. Innocent Conner Calla...

A Mighty Fortress
by David Weber

In David Weber's A Mighty Fortress, young Cayleb Ahrmahk has accomplished things few people could even dream of. Not yet even thirty years old, he's won the most crushing naval victories in human history. He's smashed a hostile alliance of no less t...

Starship Troopers
by Robert A. Heinlein

In one of Heinleins most controversial bestsellers, a recruit in a future world is sent through the toughest boot camp in the Universe to join the Terran Mobile Infantry in battle against mankinds most alarming enemy.Juan Rico signed up with the Fed...