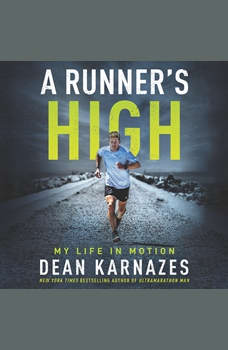 A Runner’s High: My Life in Motion

The iconic superhuman endurance runner shares the hard-won wisdom and lessons he’s learned from thirty years of competition as he embarks on his toughest challenge yet—the Western States 100—offering insights into why running is so challenging and rewarding.

For most people, running a marathon is a milestone achievement. For Dean Karnazes, it’s part of his morning routine. An endurance athlete who has pushed himself to inconceivable limits, Dean regularly runs twenty-six miles before breakfast. An ultramarathon veteran, he is among a cadre of extreme athletes who push the envelope, traversing distances of 50, 100, or more miles in some of the most challenging places on earth. Dean has run through broiling days in Death Valley, across the frozen tundra of the South Pole, and scaled some of the most beautiful mountain terrain in America to pursue his passion.

In the Art of Running, Dean contemplates his long-distance career as he prepares for the most difficult competition of his life: running the Western States 100 again at the age of 55, the 100-mile race that served as the backdrop for his classic memoir Ultramarathon Man—and the race he failed to finish in a previous attempt in 2009.

Mile by excruciating mile we accompany Dean as he trains not only his body but his mind for the grueling competition ahead. With each exhausting footfall, Dean ponders serious questions about life, pain, endurance, transcendence, and his own limitations.

In contemplating the sport that has dominated his existence and the nature of life itself, Dean searches to answer to the most important question of all: what was it all for?