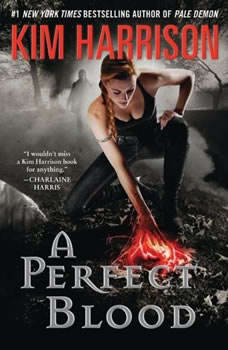 “I wouldn’t miss a Kim Harrison book for anything.”—Charlaine HarrisThere’s nothing more darkly satisfying than time spent in the Hollows—New York Times bestseller Kim Harrison’s alternate urban fantasy Cincinnati where vampires, pixies, and werewolves roam free. Harrison takes us back in A Perfect Blood, as former bounty hunter witch-turned-reluctant daywalking demon Rachel Morgan investigates a series of ritual murders, only to discover to her horror that whomever—or whatever—is responsible is actually seeking her blood.  Rachel’s sexy, supernatural adventures have consistently landed atop bestseller lists from coast-to-coast, and A Perfect Blood is no exception—another supremely satisfying excursion to a deliciously eerie fantasy realm that’s certain to delight Kim Harrison’s voracious army of fans…not to mention Laurell K. Hamilton, Charlaine Harris, Jim Butcher, Kelley Armstrong, Patricia Briggs, and Stephanie Meyers aficionados, and any reader who craves a walk on the wild, dark side.