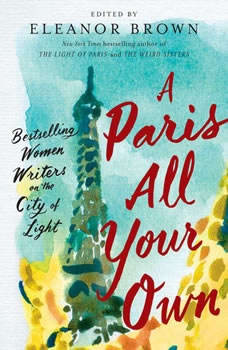 A Paris All Your Own: Bestselling Women Writers on the City of Light

A collection of all-new Paris-themed essays written by some of the biggest names in women’s fiction, including Paula McLain, Therese Anne Fowler, Maggie Shipstead, and Lauren Willig, edited by Eleanor Brown, the New York Times bestselling author of The Weird Sisters and The Light of Paris.

“My time in Paris,” says New York Times–bestselling author Paula McLain (The Paris Wife), “was like no one else’s ever.” For each of the eighteen bestselling authors in this warm, inspiring, and charming collection of personal essays on the City of Light, nothing could be more true.

While all of the women writers featured here have written books connected to Paris, their personal stories of the city are wildly different. Meg Waite Clayton (The Race for Paris) and M. J. Rose (The Book of Lost Fragrances) share the romantic secrets that have made Paris the destination for lovers for hundreds of years. Susan Vreeland (The Girl in Hyacinth Blue) and J. Courtney Sullivan (The Engagements) peek behind the stereotype of snobbish Parisians to show us the genuine kindness of real people.

Perfect for armchair travelers and veterans of Parisian pilgrimages alike, readers will delight in these brand-new tales from their most beloved authors.