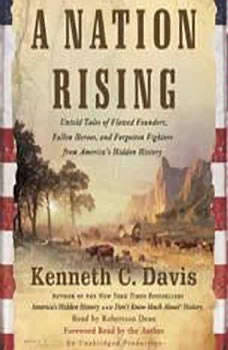 In the dramatic period from 1800 through 1850, the United States emerged from its inauspicious beginning as a tiny newborn nation, to a near-empire that spanned the continent. It was a time in which the “dream of our founders” spread in ways that few men of that Revolutionary Generation could possibly have imagined. And it was an era that led to the great, tragic conflagration that followed—the American Civil War.

The narratives that form A Nation Rising each exemplify the “hidden history” of America, exploring a vastly more complex path to nationhood than the national myth of a destiny made manifest by visionary political leaders and fearless pioneers. Davis explores:

• Aaron Burr’s 1807 trial, showcasing the political intrigue of the early Republic
• an 1813 Indian uprising and an ensuing massacre
• a mutiny aboard the slave ship Creole
• the “Dade Massacre” and the start of the second Seminole War
• the bloody “Bible Riots” in Philadelphia
• the story of Jessie Benton Frémont and Lt. John C. Frémont

The audiobook is not only riveting storytelling in its own right, but a stirring reminder of the ways in which our history continues to shape our present.