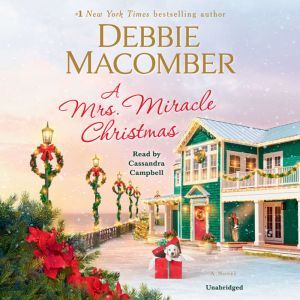 A Mrs. Miracle Christmas: A Novel

Mrs. Miracle shows an ordinary family that they are blessed beyond belief in this uplifting holiday tale from #1 New York Times bestselling author Debbie Macomber.

As the holiday season begins, Laurel McCullough could use some good news. She and her husband, Zach, have been praying for a baby that seems more and more like an impossible dream, and they’ve had to move in with her beloved grandmother, Helen, who’s having trouble taking care of herself. But when Laurel contacts a local home-care organization for help, there are no caregivers available.

Then Mrs. Miracle appears at the door. No stranger to lending a helping hand to a family in need, Mrs. Miracle reveals herself to be nothing short of a godsend. Helen’s even convinced she’s an angel! And Laurel can’t help but notice that with Mrs. Miracle’s companionship, Helen is noticeably happier and more engaged, decorating the family Christmas tree and setting up the nativity. In the meantime, Laurel and Zach encounter curious signs, all pointing toward the arrival of a special baby.

As Christmas approaches, there appears to be even more to Mrs. Miracle than meets the eye. In a classic tale of Debbie Macomber’s signature seasonal magic, Laurel, Zach, and Helen experience a holiday of heavenly proportions.