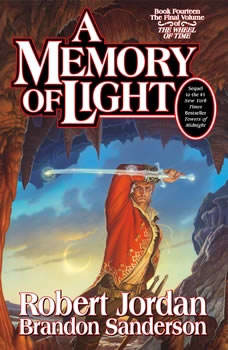 A Memory of Light

The Wheel of Time ® is a PBS Great American Read Selection! Now in development for TV! Since 1990, when Robert Jordan's The Wheel of Time® burst on the world with its first book, The Eye of the World, readers have been anticipating the final scenes of this extraordinary saga, which has sold over forty million copies in over thirty languages. A Memory of Light is the fantastic conclusion to the internationally-bestselling epic fantasy juggernaut.The Wheel of Time turns and Ages come and go, leaving memories that become legend. Legend fades to myth, and even myth is long forgotten when the Age that gave it birth returns again. In the Third Age, an Age of Prophecy, the World and Time themselves hang in the balance. What was, what will be, and what is, may yet fall under the Shadow.When Robert Jordan died in 2007, all feared that these concluding scenes would never be written. But working from notes and partials left by Jordan, established fantasy writer Brandon Sanderson stepped in to complete the masterwork. With The Gathering Storm (Book 12) and Towers of Midnight (Book 13) behind him, both of which were # 1 New York Times hardcover bestsellers, Sanderson now re-creates the vision that Robert Jordan left behind in A Memory of Light.Edited by Jordan's widow, who edited all of Jordan's books, A Memory of Light will delight, enthrall, and deeply satisfy all of Jordan's legions of readers.The Wheel of Time turns, and Ages come and pass.What was, what will be, and what is,may yet fall under the Shadow.Let the Dragon ride again on the winds of time.TV series update: "Sony will produce along with Red Eagle Entertainment and Radar Pictures. Rafe Judkins is attached to write and executive produce. Judkins previously worked on shows such as ABC’s “Agents of SHIELD,” the Netflix series “Hemlock Grove,” and the NBC series “Chuck.” Red Eagle partners Rick Selvage and Larry Mondragon will executive produce along with Radar’s Ted Field and Mike Weber. Darren Lemke will also executive produce, with Jordan’s widow Harriet McDougal serving as consulting producer." —VarietyThe Wheel of Time®New Spring: The Novel#1 The Eye of the World#2 The Great Hunt#3 The Dragon Reborn#4 The Shadow Rising#5 The Fires of Heaven#6 Lord of Chaos#7 A Crown of Swords#8 The Path of Daggers#9 Winter's Heart#10 Crossroads of Twilight#11 Knife of DreamsBy Robert Jordan and Brandon Sanderson#12 The Gathering Storm#13 Towers of Midnight#14 A Memory of LightBy Robert Jordan and Teresa PattersonThe World of Robert Jordan's The Wheel of TimeBy Robert Jordan, Harriet McDougal, Alan Romanczuk, and Maria SimonsThe Wheel of Time CompanionBy Robert Jordan and Amy RomanczukPatterns of the Wheel: Coloring Art Based on Robert Jordan's The Wheel of Time

A Memory of Light
Wheel of Time