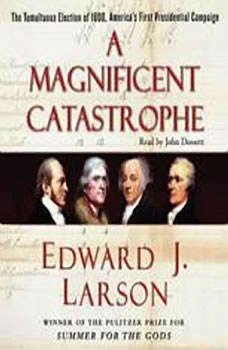 In the bestselling tradition of John Adams and 1776 ...a riveting story of our Founding Fathers Pulitzer Prize-winner Edward Larson's masterful account revisits the wild ride that was the 1800 presidential election -- an election so convulsive and so momentous that Thomas Jefferson would later dub it "America's second revolution." This was America's first true presidential campaign, giving birth to our two-party system and indelibly etching the lines of partisanship that have shaped American politics ever since. Once warm friends, John Adams and Thomas Jefferson faced off as the heads of their two still-forming parties flanked by the brilliant tacticians Alexander Hamilton and Aaron Burr, who settled their own differences in a duel. Drawing on unprecedented, meticulous research of the day to day unfolding drama, Larson vividly recreates the mounting tension as each state voted and the lead passed back and forth. The outcome remained shrouded in doubt long after the voting ended, and as Inauguration Day approached, Congress met in closed session to resolve the crisis. In its first great electoral challenge, our fragile experiment in constitutional democracy hung in the balance.