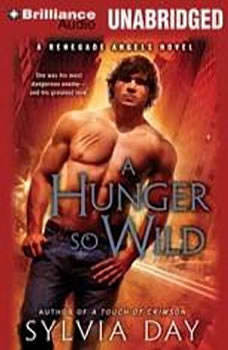 A Hunger So Wild

Elijah Reynolds is the most dominant of lycans, a rare Alpha whose skill on the hunt is surpassed only by his primal sexuality. When the lycans revolt due to the iron fist of angelic rule, he steps into command, becoming both enemy and coveted ally in the conflict between vampires and angels.Vashti is the second most powerful vampire in the world, a lethal beauty who has left a path of devastation in her wake. Tasked with proposing an alliance between vampires and the lycans who killed her mate, Vash approaches Elijah, whose need to avenge a friend demands Vash’s death even as his passion demands her surrender.Soon their enmity erodes beneath an all-consuming desire. Elijah has never encountered a woman whose warrior spirit and fierce sexual appetite rival his own, while Vash is faced with the one man strong enough to be her equal. But as war looms, they must decide where their loyalties lie—with their own kind or with the enemy lover they can no longer live without.