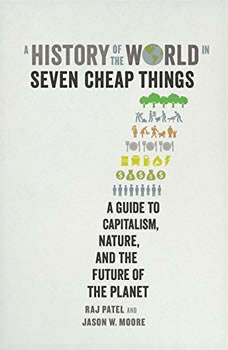 A History of the World in Seven Cheap Things: A Guide to Capitalism, Nature, and the Future of the Planet

Nature, money, work, care, food, energy, and lives: these are the seven things that have made our world and will shape its future. In making these things cheap, modern commerce has transformed, governed, and devastated Earth. In A History of the World in Seven Cheap Things, Raj Patel and Jason W. Moore present a new approach to analyzing today’s planetary emergencies. Bringing the latest ecological research together with histories of colonialism, indigenous struggles, slave revolts, and other rebellions and uprisings, Patel and Moore demonstrate that throughout history, crises have always prompted fresh strategies to make the world cheap and safe for capitalism. At a time of crisis in all seven cheap things, innovative and systemic thinking is urgently required. This book proposes a radical new way of understanding—and reclaiming—the planet in the turbulent twenty-first century.