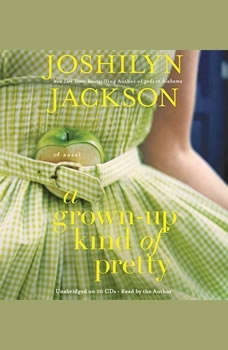 A Grown-Up Kind of Pretty

A GROWN-UP KIND OF PRETTY is a powerful saga of three generations of women, plagued by hardships and torn by a devastating secret, yet inextricably joined by the bonds of family. Fifteen-year-old Mosey Slocumb-spirited, sassy, and on the cusp of womanhood-is shaken when a small grave is unearthed in the backyard, and determined to figure out why it's there. Liza, her stroke-ravaged mother, is haunted by choices she made as a teenager. But it is Jenny, Mosey's strong and big-hearted grandmother, whose maternal love braids together the strands of the women's shared past--and who will stop at nothing to defend their future.

While listening to an author read her own book is often painful, Joshilyn Jackson is the exception. Her amazing rendition of each characters voice brought this story to life. Written in alternating viewpoints of the three central characters, this story delves thoughtfully into issues of poverty, secrets and the ultimate power of family bonds. I laughed out loud through many of lovely Mosies teenage expressions and felt the loss that Big and Liza have each endured. A beautiful and memorable book to savor......