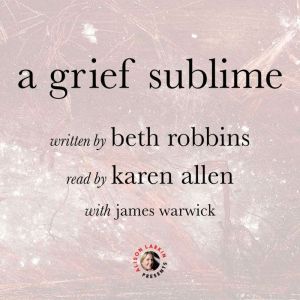 Part memoir, part fiction A Grief Sublime begins at the moment the author learns of the sudden death in a car accident of her husband of 30 years, Steve “Sproutman” Meyerowitz.Ricocheting between the splintered past and the present, in her grief Robbins enters into conversation with Keats and Whitman, Melville and Dickinson.“My poets, as I began to call them, offered me solace. They spoke to meaning and purpose.”Beautifully read by award winning narrator Karen Allen with James Warwick as the voice of the poets, Beth Robbins’ lyrical, powerful story takes us with her as her despair transcends into a hopeful new experience of life. And a recognition of the love that remains after death.The true events of A Grief Sublime are being adapted into a short film directed by Academy Award winner Cynthia Wade.This audiobook is followed by an exclusive interview with the author Beth Robbins and audiobook producer Alison Larkin.“Luminous, breathtaking, A Grief Sublime takes us gently by the hand and beckons us to walk beyond the edges of pain into a transcendent world where the dead and living co-exist. —Cynthia Wade, Academy Award winning director This audiobook is followed by an exclusive interview with the author Beth Robbins and audiobook producer Alison Larkin. About the NarratorsKaren Allen Karen Allen is an award-winning theatre and film actress and director. She has starred in over 50 films including Raiders of the Lost Ark, Until September, Starman, Scrooged, Year By the Sea and most recently Colewell. She recently directed the short film A Tree. A Rock. A Cloud. based on Carson McCullers' short story. James Warwick is the award-winning narrator of The Picture of Dorian Gray and The Mysterious Affair at Styles by Agatha Christie. Starring T.V., film and theater appearances include the Masterpiece Theater TV Series Partners in Crime, Camelot and The Ideal Husband on Broadway.