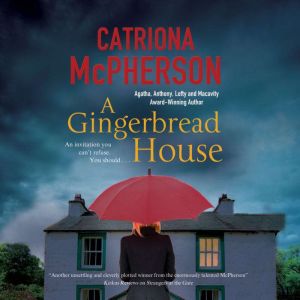 When shy, lonely Ivy meets a woman who claims to be her long-lost sister, she knows it’s too good to be true. She decides to trust Kate anyway. She wants a family. She wants someone to love. But she’s making a mistake. When Ivy enters Kate’s fairytale cottage deep in the heart of Scotland, she doesn’t come out. She’s the first to go missing, and she won’t be the last. Meanwhile, in another part of the forest, Tash’s journey is just beginning… Multi-award-winning master of suspense Catriona McPherson is back with an ominous, twisty psychological thriller set in contemporary Scotland that will keep you on the edge of your seat.

A Gingerbread House by Catriona MacPherson is a strange tale of missing women. These women were taken, rather, walked into a trap, by the least suspected little woman ever. She convinced them to come to her. When she did, she trapped them in a cellar. February, March, May. April was evidently too careful to fall for it. Tash, on the other hand, had run away with evidence that her father's transport company was smuggling human cargo. Knowing that once she confronted him she might end up dead, she planted the information in places that would eventually be discovered. It was all there. She confronted him, but not before discovering it was worse than she thought: it was trafficking. He denied it, but of course he was guilty. She wanted to keep the company and bring it back into prosperity but was that possible? She ran with a meeting date that he would turn over the company to her, but she was not stupid. She made it so people would know she was missing so they would look for here. That was the problem with the missing women. They were loners, worked for themselves. No one cared, least of all the police. Their loves converge in the most interesting of ways. I listened to the audio version of this book and it was a very good job done by Mhairi Morrison who kept the women straight. She was low-key and undramatic, even at the most dramatic moments. She let the words speak for themselves. Tash was a very clever woman and played to her strengths. The women in the cellar lasted for months and there were plenty of hardships. The reasons for the kidnapping were not made clear until the very end, after Tash joined the others. It was a clever plot and paced perfectly. In the beginning the women's stories were introduced separately, with Tash interspersed, until they kind of came together, and it became all about Tash, until she joined them. It was interesting to see how strong these various women could be. They were not a type, but joined in that trait. I enjoyed listening to A Gingerbread House. I recommend it. I was invited to read a free e-ARC of the audio version of The Gingerbread House by Dreamscape Media through Netgalley. All thoughts and opinions are mine. #netgalley #dreamscapemedia #agingerbreadhouse #catrionamacpherson