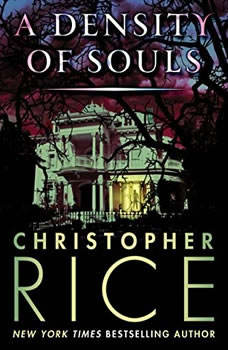 A Density of Souls

Four childhood friends in present-day New Orleans are torn apart by envy, passion, and a secret murder.Five years ago, Meredith, Brandon, Greg, and Stephen quickly discover the fragile boundaries between friendship and betrayal as they enter high school and form new allegiances. Meredith, Brandon, and Greg gain popularity, while Stephen is viciously treated as an outcast. Then two violent deaths destroy the already delicate bonds of their friendship.When the friends are drawn back together, new facts about their mutual history are exposed and what was held to be a tragic accident is revealed as murder. As the true story emerges, other secrets begin to unravel with more dangerous, far-reaching consequences.A Destiny of Souls is a stunning debut novel that uncovers the darker side of the teenage psyche.

The Snow Garden
by Christopher Rice

A shocking death exposes dangerous forces of seduction, obsession, and vengeance lurking beneath the idyllic surface of a prestigious New England university.It is more than just the late November weather that has cast a chill over the campus of Athe...