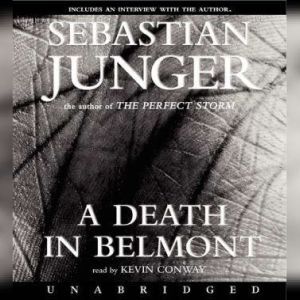 A Death in Belmont

In 1963, with the city of Boston already terrified by a series of savage crimes known as the Boston Stranglings, a murder occurred in the quiet suburb of Belmont, just a few blocks from the house of Sebastian Junger's family -- a murder that seemed to fit exactly the pattern of the Strangler. Roy Smith, a black man who had cleaned the victim's house that day, was arrested, tried, and convicted, but the terror of the Strangler continued.Two years later, Albert DeSalvo, a handyman who had been working at the Jungers' home on the day of the Belmont murder, and had often spent time there alone with Sebastian and his mother, confessed in lurid detail to being the Boston Strangler.This is the point of entry to Junger's first book-length project since The Perfect Storm: a narrowly averted tragedy for Junger's family opens out into an electrifying exploration of race and justice in America. By turns exciting and subtle, the narrative chronicles three lives that collide -- and are ultimately destroyed -- in the vortex of one of the first and most controversial serial murder cases in America. The power of the story and the brilliance of Junger's reporting place this book on the short shelf of classics beside In Cold Blood and Helter Skelter.Read by Kevin Conway

I hadn’t read Junger’s blockbuster uA Perfect Storm/u, but I ihad/i read a bunch of his articles in Vanity Fair magazine. I remembered his writing as incisive and as objective as humanly possible. I had high hopes for this book.The confessed Boston Strangler, Albert DeSalvo, once helped build an addition to Junger’s childhood home. I expected an insightful snapshot of Junger’s upper middle class suburb of Boston circa mid 1960s a description of how knowing that a serial killer had penetrated their secure bubble of bourgeoisie affected the populace. Instead, I got a messy, sprawling, ruminating book about pretty much nothing.brJunger went into a lot of detail about a murder which occurred a few blocks from his home, a murder later confessed to by Albert DeSalvo, but for which a black day laborer had been convicted. If Junger had focused on that particular murder and used it as a jumping board to explore racism or poverty, or…something, it might have been a decent book. He didn’t. He wrote about two times Albert DeSalvo freaked his mother out, he provided a primer on serial killer behavior as insightful as but WAY wordier than the a href=[URL not allowed] target=”blank” Wikipedia article on serial killers/a, he wrote far too long about elementary justice system history – a topic which has been exhaustively and, frankly, more entertainingly covered by pretty much any prolific true crime writer, and he ended it all by asking WHY? WHY? as if he was writing an eighth grade gifted and talented English class essay.brIt’s a shame. Someone needed to tell Junger during writing that his book was an unfocused mess. But no one did. This is a case of Junger’s success hurting him. His writing style is crisp as ever, though, so I can’t say the book ******. But it was too blurry to enjoy.