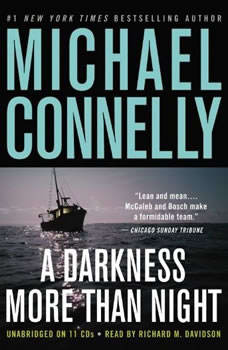 A Darkness More Than Night

LAPD Detective Harry Bosch crosses paths with FBI profiler Terry McCaleb in the most dangerous investigation of their lives.Harry Bosch is up to his neck in a case that has transfixed all of celebrity-mad Los Angeles: a movie director is charged with murdering an actress during sex, and then staging her death to make it look like a suicide. Bosch is both the arresting officer and the star witness in a trial that has brought the Hollywood media pack out in full-throated frenzy.Meanwhile, Terry McCaleb is enjoying an idyllic retirement on Catalina Island when a visit from an old colleague brings his former world rushing back. It's a murder, the unreadable kind of murder he specialized in solving back in his FBI days. The investigation has stalled, and the sheriff's office is asking McCaleb to take a quick look at the murder book to see if he turns up something they've missed.McCaleb's first reading of the crime scene leads him to look for a methodical killer with a taste for rituals and revenge. As his quick look accelerates into a full-sprint investigation, the two crimes - his murdered loner and Bosch's movie director - begin to overlap strangely. With one unsettling revelation after another, they merge, becoming one impossible, terrifying case, involving almost inconceivable calculation. McCaleb believes he has unmasked the most frightening killer ever to cross his sights. But his investigation tangles with Bosch's lines, and the two men find themselves at odds in the most dangerous investigation of their lives.

Sixkill
by Robert B. Parker

The last Spenser novel completed by Robert B. Parker.On location in Boston, bad-boy actor Jumbo Nelson is accused of the rape and murder of a young woman. From the start the case seems fishy, so the Boston PD calls on Spenser to investigate. Things ...

Critically acclaimed and bestselling crime writer James Lee Burke returns to Louisiana where his ever-popular hero, Dave Robicheaux, sleuths his way through a hotbed of sin and uncertainty. For Dave Robicheaux, life in Louisiana is filled with haun...

One False Move
by Harlan Coben

She's smart, beautiful, and she doesn't need a man to look after her. But sports agent Myron Bolitar has come into her life—big time. Now Myron's next move may be his last. . .  Brenda Slaughter is no damsel in distress. Myron Bolitar ...