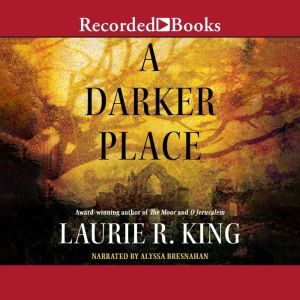 Laurie R. King has won an Edgar Award and places on best-seller lists for her mysteries. Fans are addicted to her two remarkably successful series, one featuring San Francisco policewoman Kate Martinelli, and the other focusing on Mary Russell, Sherlock Holmes' young wife and partner. A Darker Place stands alone. It is a journey into the secretive world of cults. Professor Anne Waverly teaches religious studies at a respected university. Middle-aged and slightly lame, she spends her days in lecture halls and offices. But occasionally she works for the FBI. As Ana Wakefield, an eager seeker of higher truths, she infiltrates cults. Now, leaving the security of academia, she is on her way to Arizona in a battered VW bus. Her assignment is to investigate a group called Change. As Ana gathers information, she is pulled toward a fiery confrontation with the charismatic leader of the cult. But her growing attachment for two of the group's children may require her to make a greater sacrifice. Through Alyssa Bresnahan's rich voice, Ana, FBI agents, and cult members stand out against the darkly compelling fabric of the text.