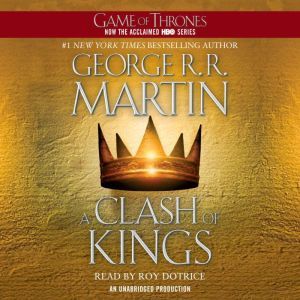 A Clash of Kings: Game of Thrones

Series: Song of Ice and Fire #2

THE BOOK BEHIND THE SECOND SEASON OF GAME OF THRONES, AN ORIGINAL SERIES NOW ON HBO.

In this sequel to A Game of Thrones, George Martin pursues the embattled Seven Kingdoms through a bitter 10-year winter in which good and evil contend for power. When cruel Queen Cerisi's son takes the Iron Throne following the death of its king, Robert Baratheon, the Queen's sons and Robert's brothers battle for control of the realm. Robert's young daughter, Princess Arya Stark, flees the kingdom disguised as a boy, as the exiled last heir of the former ruling family tends to his dragons. Meanwhile, the guardians of the realm's Wall dwindle in numbers as menacing barbarians gather their forces. Set in a glittering fantasy world enriched by 8,000 years of history, this baroque jewel captivates with its believable characters, deftly realized magic, and intricate plotting. 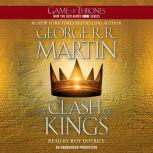 A Clash of Kings: Game of Thrones
Song of Ice and Fire #2