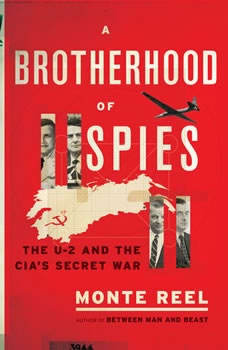 A Brotherhood of Spies: The U-2 and the CIA's Secret War

A thrilling dramatic narrative of the top-secret Cold War-era spy plane operation that transformed the CIA and brought the U.S. and the Soviet Union to the brink of disaster

On May 1, 1960, an American U-2 spy plane was shot down over the Soviet Union just weeks before a peace summit between the two nations. The CIA concocted a cover story for President Eisenhower to deliver, assuring him that no one could have survived a fall from that altitude. And even if pilot Francis Gary Powers had survived, he had been supplied with a poison pin with which to commit suicide.
But against all odds, Powers emerged from the wreckage and was seized by the KGB. He confessed to espionage charges, revealing to the world that Eisenhower had just lied to the American people--and to the Soviet Premier. Infuriated, Nikita Khrushchev slammed the door on a rare opening in Cold War relations.
In A Brotherhood of Spies, award-winning journalist Monte Reel reveals how the U-2 spy program, principally devised by four men working in secret, upended the Cold War and carved a new mission for the CIA. This secret fraternity, made up of Edwin Land, best known as the inventor of instant photography and the head of Polaroid Corporation; Kelly Johnson, a hard-charging taskmaster from Lockheed; Richard Bissell, the secretive and ambitious spymaster; and ace Air Force flyer Powers, set out to replace yesterday's fallible human spies with tomorrow's undetectable eye in the sky. Their clandestine successes and all-too-public failures make this brilliantly reported account a true-life thriller with the highest stakes and tragic repercussions.