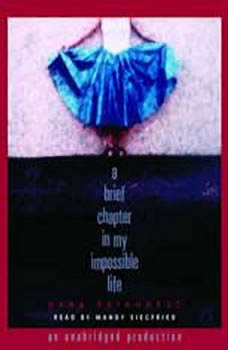 A Brief Chapter In My Impossible Life

Simone’s starting her junior year in high school. Her mom’s a lawyer for the ACLU, her dad’s a political cartoonist, so she’s grown up standing outside the organic food coop asking people to sign petitions for worthy causes. She’s got a terrific younger brother and amazing friends. And she’s got a secret crush on a really smart and funny guy–who spends all of his time with another girl.

Then her birth mother contacts her. Simone’s always known she was adopted, but she never wanted to know anything about it. She’s happy with her family just as it is, thank you.

She learns who her birth mother was–a 16-year-old girl named Rivka. Who is Rivka? Why has she contacted Simone? Why now? The answers lead Simone to deeper feelings of anguish and love than she has ever known, and to question everything she once took for granted about faith, life, the afterlife, and what it means to be a daughter.

MILLY KAUFMAN IS an ordinary American teenager living in Vermont—until she meets Pablo, a new student at her high school. His exotic accent, strange fashion sense, and intense interest in Milly force her to confront her identity as an adopted ...

The Alex Crow
by Andrew Smith

Once again blending multiple story strands that transcend time and place, Grasshopper Jungle author Andrew Smith tells the story of 15-year-old Ariel, a refugee from the Middle East who is the sole survivor of an attack on his sm...

The Inexplicable Logic of My Life
by Benjamin Alire SA¡enz

The Authentics
by Abdi Nazemian

Daria Esfandyar is Iranian-American and proud of her heritage, unlike some of the Nose Jobs in the clique led by her former best friend, Heidi Javadi. Daria and her friends call themselves the Authentics, because they pride themselves on always keep...

In a novel in two voices, a popular teen and an artistic loner forge an unlikely bond — and create an entire universe — via texts. But how long before the real world invades Starworld?Sam Jones and Zoe Miller have one thing in common: th...

Why is there a gap in Jules's baby album? A wry and poignant coming-of-age novel about finding the truth in lies, salvaging hope in heartbreak, and making peace with missing pieces.Eighteen-year-old Jules has always wished for a close-knit family. S...

Far from the Tree
by Robin Benway

National Book Award Winner and New York Times Bestseller!Perfect for fans of NBC's "This Is Us," Robin Benway’s beautiful interweaving story of three very different teenagers connected by blood explores the meaning of family in all its forms&...

The How & the Why
by Cynthia Hand

"Cynthia Hand is the master of pulling at your heartstrings. The How & the Why tells both sides of an adoption story with love, compassion, and care." —Brigid Kemmerer, New York Times bestselling author of Letters to the Lost A poignant ex...