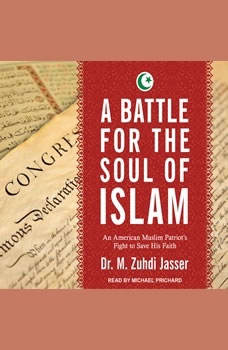 A Battle for the Soul of Islam: An American Muslim Patriot's Fight to Save His Faith

Among the unsettling social shifts in the wake of 9/11 was the global attention paid to Islam. Here in the United States, we became divided, often sadly along partisan lines, between those who believed every Muslim was a potential threat and those who believed no Muslim could do wrong.For conservative Wisconsin native and former U.S. Navy lieutenant commander Dr. M. Zuhdi Jasser, these radical times meant facing a new reality as a devout Muslim and a patriot—a certain betrayal within his faith, and a need to answer a question that crossed the minds of even the most sensitive and politically correct: "Can a good Muslim be a good American as well?" Jasser founded the American Islamic Forum for Democracy (AIFD) to instill in young American Muslims an appreciation for the distinctively positive impact that this nation's ideals of liberty have had upon the world. As a nationally recognized expert on Muslim radicalization, he offers non-Muslims a definitive comprehension of the difference between Islam and the spiritual cancer known as Islamism, or political Islam, and how violence and extremism run counter to Islam's true teachings. As he persuasively argues, until we acknowledge the threat of Islamism in all its forms, the majority of Americans will be gulled into recognizing only the most obvious: terrorism.In A Battle for the Soul of Islam, Jasser embraces both his faith and his country while asking hard questions:Are American Muslim children learning entitlement as victims, or are they being taught individual responsibility and critical thinking?Are poisonous conspiracy theories dividing their American identity, or are they gaining exposure to reason, nationalism, and patriotism? Are Muslims publicly critical of the Islamist movements of the Middle East, or do they remain silent on aspects of religious doctrine that conflict with modernity and universal equality? Is the American press downplaying the seditious threat of homegrown Islamist radicalism and the influence of Islamists' propaganda arm on our governmental policies?Is our culture of political correctness a major obstacle toward long-overdue Muslim reform against Islamism?All these years after 9/11, it's time for us to understand the true threat of Islamism. It is a Muslim problem that needs a Muslim solution, and A Battle for the Soul of Islam builds a solid, balanced, and imperative must-listen foundation for the fight.