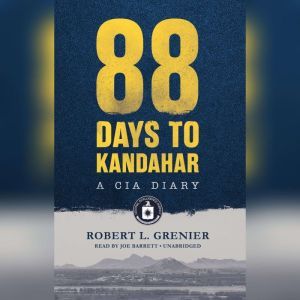 88 Days to Kandahar: A CIA Diary

The former head of CIA counterterrorism takes listeners behind the scenes of the war on terror. The first Afghan War, the CIAs war in response to 9/11, was approved by President Bush and directed by the author, Robert Grenier, the CIA station chief in Islamabad. Forging separate alliances with warlords, Taliban dissidents, and Pakistani intelligence, Grenier defeated the Taliban and put Hamid Karzai in power in eighty-eight days. Later, as head of CIA counterterrorism, he watches as bureaucratic dysfunction in the CIA, Pentagon, and the White House lead to failure in Iraq and Afghanistan. NOTE: All statements of fact, opinion, or analysis expressed are those of the author and do not reflect the official positions or views of the CIA or any other U.S. Government agency. Nothing in the contents should be construed as asserting or implying U.S. Government authentication of information of Agency endorsement of the authors views. This material has been reviewed by the CIA to prevent the disclosure of classified information. The Central Intelligence Agency has not approved, endorsed, or authorized this book or the use of the CIA seal, name, or initials.