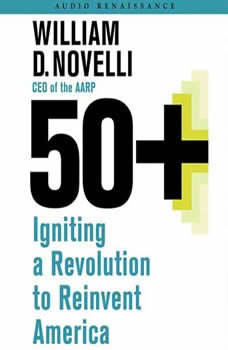 50+: Igniting a Revolution to Reinvent America

Bill Novelli doesn't believe that retirement has to mean rocking one's way into the sunset. As the head of the strongest organization of retired people in the world, the AARP, Novelli believes that retirement can be a time of action and influence rather than one of illness and decline. In this inspiring book, Bill Novelli will speak to the growing number of Americans age 50 and older about what they can do to shape the national debate about aging and influence government policy towards retirees. For a long time, many of the government forces in Washington have hoped to divide the nation along various lines and one of those dividing lines is age. Against this "divide and conquer" mentality, Novelli will argue that the common, shared experience of aging will serve not to divide the US, but to unite it. And the united tide of change is potentially enormous: When the Baby Boomer generation ages to the 50- year mark, they will create the largest group of retirees in the history of the country, solidifying a powerful constituency for major change in ways beneficial to the entire nation. Novelli believes that this group is capable of just about anything. 50+ is a rallying cry for an aging America by a man who knows how to get the job done.

The Truth About Obamacare
by Sally C. Pipes

In The Truth About Obamacare, Sally C. Pipes—president of the Pacific Research Institute and an acknowledged expert on health care reform—reveals what Democrats in Congress and President Barack Obama don't want you to know: Obamacare is ...

The Cannabis Manifesto
by Steve DeAngelo

The Cannabis Manifesto is both a call to action and a radical vision of humans' relationship with this healing but controversial plant. Steve DeAngelo, the founder of Harborside Health Center, the world's largest medical-cannabis dispensary, present...

The Spirit Level
by Kate Pickett

It is a well-established fact that in rich societies the poor have shorter lives and suffer more from almost every social problem. The Spirit Level, based on thirty years of research, takes this truth a step further. One common factor links the h...

Not a Crime to Be Poor
by Peter Edelman

In addition to exposing racially biased policing, the Justice Department’s Ferguson Report exposed to the world a system of fines and fees levied for minor crimes in Ferguson, Missouri, that, when they proved too expensive for Ferguson’s...

Beginning in the 1950s, America entered a period of unprecedented social reform. This remarkable book demonstrates how the social programs of the 1960s and ’70s had the unintended and perverse effect of slowing and even reversing earlier pro...

The Vision of the Anointed
by Thomas Sowell

In this devastating critique of the mindset behind the failed social policies of the past thirty years, Thomas Sowell sees what has happened not as a series of isolated mistakes, but as a logical consequence of a vision whose defects have led to dis...

The Burden of Bad Ideas
by Heather Mac Donald

In closely reported stories from the streets of New York to the seats of intellectual power, MacDonald shows how bad ideas get started and then acquire a life of their own. Her reports trace the transformation of influential opinion-makers and large...

Bill Novelli doesn't believe that retirement has to mean rocking one's way into the sunset. As the head of the strongest organization of retired people in the world, the AARP, Novelli believes that retirement can be a time of action and influence ra...

Any way you look at it, for whoever is using it, marijuana is a medicinal plant, in abundant supply. Every month and every year that goes by, we find out more positive things about it. Marijuana has been demonized through the years but obviously thi...