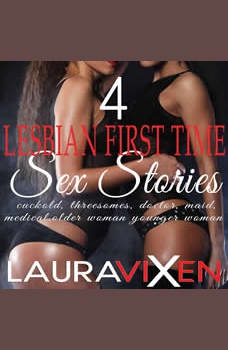 Sophie’s mistake was forgetting to knock. It meant she walked into an occupied room and the sight of the pretty guest in nothing but stockings and heels brought her to a stop. The panic that she’s in trouble ends when the older woman invites her in and she gives in to every demand as a kinky hotel maid fantasy plays out for real.

When Patricia finds out her older girlfriend dreams of being cuckolded, she thinks it’s nothing more than dirty words as they make love and agrees she would do it. She finds out it’s more than that, however, when her girlfriend comes home with a friend she doesn’t know the very next night. Shock turns to excitement at the prospect of getting it on with a stranger and she gives in to the fantasy of letting herself be used while her girlfriend watches.

Being a rising star on the rodeo scene affords cowgirl, Cassidy Wright, some benefits and that includes being put up for the night by the organizer of a competition she’s invited to. She’s not the only one being allowed to bunk down though and she finds out the other two women are rodeo clowns. There’s nothing to laugh about when they come on to her though and she’s more than willing to take them on, as what she thought would be a relaxing night turns physical.

Dominated by the Hotel Maid
by Laura Vixen