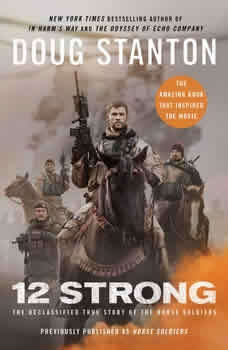 12 Strong: The Declassified True Story of the Horse Soldiers

“A thrilling action ride of a book” (The New York Times Book Review)—from Jerry Bruckheimer in theaters everywhere January 19, 2018—the New York Times bestselling, true-life account of a US Special Forces team deployed to dangerous, war-ridden Afghanistan in the weeks following 9/11.Previously published as Horse Soldiers, 12 Strong is the dramatic account of a small band of Special Forces soldiers who secretly entered Afghanistan following 9/11 and rode to war on horses against the Taliban. Outnumbered forty to one, they pursued the enemy army across the mountainous Afghanistan terrain and, after a series of intense battles, captured the city of Mazar-i-Sharif. The bone-weary American soldiers were welcomed as liberators as they rode into the city. Then the action took a wholly unexpected turn. During a surrender of six hundred Taliban troops, the Horse Soldiers were ambushed by the would-be POWs. Dangerously overpowered, they fought for their lives in the city’s immense fortress, Qala-i-Janghi, or the House of War. At risk were the military gains of the entire campaign: if the soldiers perished or were captured, the entire effort to outmaneuver the Taliban was likely doomed. “A riveting story of the brave and resourceful American warriors who rode into Afghanistan after 9/11 and waged war against Al Qaeda” (Tom Brokaw), Doug Stanton’s account touches the mythic. The soldiers on horses combined ancient strategies of cavalry warfare with twenty-first-century aerial bombardment technology to perform a seemingly impossible feat. Moreover, their careful effort to win the hearts of local townspeople proved a valuable lesson for America’s ongoing efforts in Afghanistan. With “spellbinding...action packed prose...The book reads more like a novel than a military history...the Horse Soldier’s secret mission remains the US military’s finest moment in what has since arguably been a muddled war” (USA TODAY).

Ninety-nine elite American soldiers are trapped in the middle of a hostile city. As night falls, they are surrounded by thousands of enemy gunmen: Their wounded are bleeding to death. Their ammunition and supplies are dwindling. This is the story of...

On a moonless night just weeks after September 11, 2001, a U.S. Special Forces team of Green Berets known as ODA 574 infiltrated the mountains of southern Afghanistan with a seemingly impossible mission: to foment a tribal revolt and force the Tal...

Ninety-nine elite American soldiers are trapped in the middle of a hostile city. As night falls, they are surrounded by thousands of enemy gunmen: Their wounded are bleeding to death. Their ammunition and supplies are dwindling. This is the story of...

Victor Davis Hanson has given us painstakingly researched and pathbreaking accounts of wars ranging from classical antiquity to the twenty-first century. Now he juxtaposes an ancient conflict with our most urgent modern concerns to create his most e...

Arguably one of the most provocative, puzzling, and misunderstood organizations of medieval times, the legendary Knights Templar have always been shrouded in a veil of mystery, while inspiring popular culture from Indiana Jones to Dan Brown. In The ...

From award-winning journalist and combat veteran Michael Hirsh comes the thrilling inside story of the Air Force's pararescue operations in Afghanistan. The first journalist to be embedded with an Air Force combat unit in the war on terrorism, Hirsh...

It is difficult to find another soldier's story to equal Captain Darrell Watt's in terms of time spent on the field of battle and challenges faced. Even by the lofty standards of the SAS and Special Forces, one has to look far to find anyone who can...

The founder of Blackwater offers the gripping, previously untold story of the world’s most controversial military contractorBlackwater is one of the most misunderstood companies of our time. As Erik Prince, its founder and ...