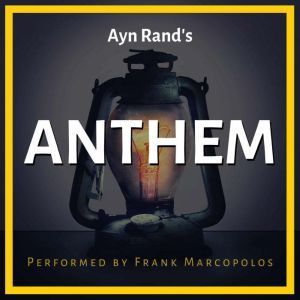 Ayn Rand (1905-1982) was a Russian-American writer and philosopher. Born and schooled in Russia, she moved to the United States in 1926 after her family's business was confiscated by the government. She is a Prometheus Award Hall of Fame inductee (1987 for ANTHEM.) Her works, both fiction and non-fiction, have been highly influential and critically polarizing. Rand's books continue to be extremely popular, with over 29 million copies sold as of 2013. There have also been numerous adaptations of her works.

ANTHEM (1938) takes place at an unspecified future date when mankind has entered another Dark Age. Technological advancement is now carefully planned and the concept of individuality has been eliminated. A young man known as Equality 7-2521 rebels.

Frank Marcopolos (1972-) is a Greek-American audiobook narrator and author. He is also the founder of The Whirligig literary magazine, a podcaster, and Learning Ally volunteer. His YouTube channel, where he posts audiobooks of short stories, has garnered nearly 600,000 views and 2,100 subscribers as of April 2019.

Frank was with the 82nd Airborne Division in the 1990s, and currently lives at The Bookquarium in Pittsburgh, PA. More information about his works can be found at his website, https://FrankMarcopolos.com.