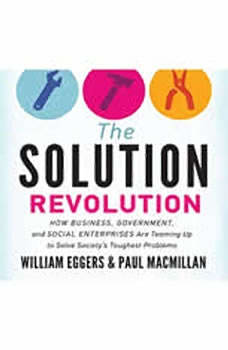 The Solution Revolution: How Business, Government, and Social Enterprises Are Teaming Up to Solve Societys Toughest Problems

World hunger. Climate change. Crumbling infrastructure. It’s clear that in today’s era of fiscal constraints and political gridlock the government alone can no longer tackle these and other towering social problems. What’s required is a new, more collaborative and productive economic system. The Solution Revolution brings hope-revealing a new economy where players from across the spectrum of business, government, philanthropy, and social enterprise converge to solve big problems and create public value.By erasing public-private sector boundaries, the solution economy is unlocking trillions of dollars in social benefit and commercial value. Where tough societal problems persist, new problem solvers are crowdfunding, ridesharing, app-developing, or impact-investing to design innovative new solutions for seemingly intractable problems. Providing low-cost health care, fighting poverty, creating renewable energy, and preventing obesity are just a few of the tough challenges that also represent tremendous opportunities for those at the vanguard of this movement.Government cannot handle alone the huge challenges facing our global society-and it shouldn’t. We need a different economic paradigm that can flexibly draw on resources, combine efforts, and create value, while improving the lives of citizens. The Solution Revolution shows the way.