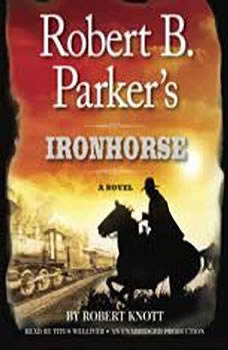 Series: A Cole and Hitch Novel #5

For years, Virgil Cole and Everett Hitch have ridden roughshod over rabble-rousers and gun hands in troubled towns like Appaloosa, Resolution, and Brimstone.  Now, newly appointed as Territorial Marshalls, they find themselves traveling by train through the Indian Territories.  Their first marshaling duty starts out as a simple mission to escort Mexican prisoners to the border, but when the Governor of Texas, his wife and daughters climb aboard with their bodyguards and $500,000 in tow, their journey suddenly becomes a lot more complicated.

The problem is Bloody Bob Brandice.  He and Virgil have had it out before, an encounter that left Brandice face-down in the street with two .44 slugs lodged in him.  Now, twelve years later on a night train struggling uphill in a thunderstorm, Brandice is back – and he’s not alone.  Cole and Hitch find themselves in the midst of a heist with a horde of very bad men, two beautiful young hostages, and a man with a vendetta he’s determined to carry out.

Blue-Eyed Devil
by Robert B. Parker

Law enforcement in Appaloosa had once been Virgil Cole and me. Now there was a chief of police and twelve policemen. Our third day back in town, the chief invited us to the office for a talk. The new chief is Amos Callico, a tall, fat man in a ...

Robert B. Parker's Ironhorse: A Rob...
A Cole and Hitch Novel #5

Robert B. Parker's Bull River
A Cole and Hitch Novel #6