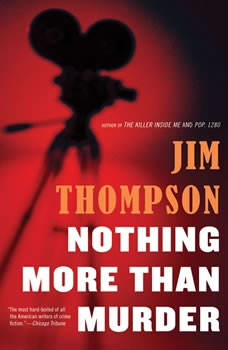 Nothing More than Murder

Joe Wilmot can't stand his wife Elizabeth. But he sure loves her movie theater. It's a modest establishment in a beat-down town--but Joe has the run of the place, and inside its walls, he's king. Without the theater, he'd be sunk. Without his leadership, the theater would close in a heartbeat. If it isn't the life Joe imagined for himself, at the very least, it's livable.Everything changes when Joe falls for the housemaid Carol, and the two can't keep it a secret from Elizabeth. Elizabeth won't leave Joe the theater unless he provides for her...but he's put all his money into the show house.Carol and Joe's only hope is the life insurance policies they've taken out on each other. If one of them were to be presumed dead, they'd have more than enough money to solve all their problems...No one knows murder better than Jim Thompson and in this incisive foray into the dark dealings of the mid-20th century movie industry, he doesn't disappoint, in the riveting story of a love triangle gone horribly wrong, and just how far one man will go to hold on to a desperate dream.