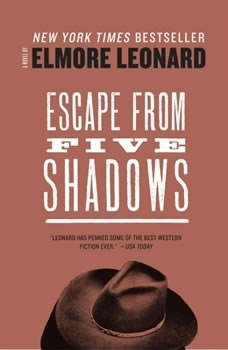 Corey Bowen is an innocent man. Wrongly convicted, and imprisoned in the brutal labor camp at Five Shadows run by a sadistic embezzler willing to kill to keep his scheme running, Bowen is determined to break out or die trying. The trackers have already caught him once, dragged him back through the mesquite and rocks, and beat him bloody and near dead after his last attempt. But this time he'll have help—from a lady with murder on her mind and a debt to pay back. They say that breaking out of Five Shadows is impossible—but Bowen is a different breed, and this time he will go to any extreme to escape.

Shadow of a Star
by Elmer Kelton

Deputy Sheriff Jim-Bob McClain isn't sure he's ready to follow in his father's footsteps as the law in Coolridge County. In fact, he has a hard enough time keeping the peace between the drunks in the local saloon. But with tough Sheriff Mont Naylor ...

After discovering six gold Roman coins buried in the mud of the Devil’s Dyke, Barnabas Sackett enthusiastically invests in goods that he will offer for trade in America. But Sackett has a powerful enemy: Rupert Genester, nephew of an earl, wan...

The Western Trail
by Ralph Compton

In the aftermath of the Civil War, cash-starved Texans turned to the only resource they possessed in abundance: longhorn cows. Despite the hazards of trailing longhorns across some three hundred miles of Indian Territory, this was the only way to ac...