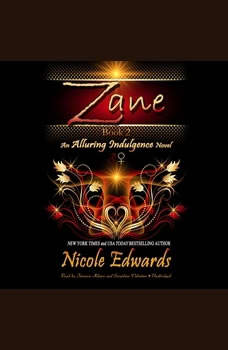 Vanessa Carmichael will never forget that horrible day for as long as she lives. With Zane fully on the mend from the brutal attack he suffered right in her very own yard, she knows she should be grateful, which she is. She also knows that walking away from Zane might be the only way to keep him safe. V knows she can't trust her own heart, especially when it comes to the youngest Walker brother. But he's not the kind of man who will walk away when there is something he wants.Zane Walker spent months in the hospital after the attack, but he walked away with his life. Now that he's out of the hospital, he has only one goal in mind: getting the girl. From the first time he kissed her, Zane knew V was the one for him. He also knew that getting her wasn't going to be easy. She's stubborn, and the walls she has erected around her heart are nearly impenetrable. But the thing about Zane is that he never gives up-and he's not about to start now.Can V learn to open her heart to the one man who is desperate to get past those walls she has erected, or will she walk away to protect him? How long will Zane allow her to deny what he knows is growing between them? Is the only option to obscure the underlying emotions with spine-tingling lust? When V and Zane come together, smoke detectors go on the fritz, but when they bring Zane's best friend Beau into the mix, extra fire extinguishers are needed.Warning! This book contains graphic material that is not suitable for anyone under the age of eighteen.

Holidays with the Walker Brothers
The Alluring Indulgence Series #4