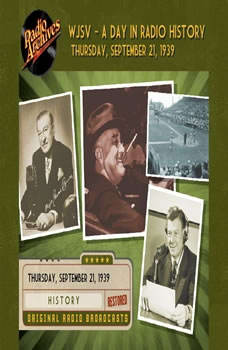 WJSV - A Day in Radio History

This rare and exciting collection offers you the chance to travel back in time and experience a complete broadcast day from September 1939, including every minute of the day from 6:00 AM sign-on right through sign-off at 1:00 AM the next morning. Thanks to the foresight of the Library of Congress and station WJSV in Washington D.C., you'll hear exactly what it was like to listen to the radio in 1939 - including the early morning wake-up show, the soap operas, the news and interviews, a live baseball game from Griffith Stadium, and a speech by President Roosevelt, right through to Amos 'n' Andy, Major Bowes and his Original Amateur Hour, a series of live big band remotes, and the national anthem at the end of the day. It's a once in a lifetime trip back to radios golden age. Chapters: #1 Sign On #2 Music #3 The Sun Dial #4 Certified Magic Carpet #5 Bachelor's Children #6 Pretty Kitty Kelly #7 Myrt & Marge #8 Hilltop House #9 Stepmother #10 News Summary with Robert Trout #11 Mary Lee Taylor #

Edward Kennedy 'Duke' Ellington (1899 - 1974) was and still remains a powerfully influential figure in the world of music. Whether it was in jazz, popular song, big bands, or modern classical-form compositions, Ellington's orchestras always led th...

The origins of Jack 'Flashgun' Casey can be traced to the 1930s detective pulp magazine 'Black Mask'; the hard-boiled photojournalist was introduced in the March 1934 issue by former newspaperman/ad exec George Harmon Coxe. So radio audiences rece...

Terry Gross brings out the best in the greatest minds on the planet-including the funny ones. Drawn from her long-running, award-winning public radio show, this new collection features in-depth interviews with the bright, shining wits of our time. O...

Dr. Jekyll and Mr. Hyde is just one of over 300 radio series and serials produced by George Edwards over the course of his twenty year career in radio. Telling Robert Louis Stevenson's classic tale of a man divided, this fifteen minute serial debu...

After 40-plus years of delighting radio audiences each Saturday night with America's favorite live variety show, A Prairie Home Companion founder and host Garrison Keillor bids farewell with an unforgettable performance from the Hollywood Bowl in Lo...

Big Bands on One Night Stand, Volume 2
by Various

Whether you remember the big band era yourself or appreciate the timeless music of the war years and beyond, you'll find many treasures in this collection, offering twenty half-hour broadcasts dating from 1943 to 1952 and featuring twenty of the ...