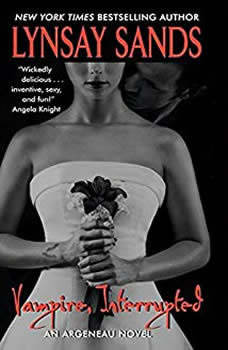 After seven hundred years of life, Marguerite Argeneau finally has a career. Well, the start of one, anyway. She's training to be a private investigator, and her first assignment is to find an immortal's mother. It seemed simple enough, until Marguerite wakes up one evening to find herself at the wrong end of a sword. Now she realizes she's in way over her head.Julius Notte wants to protect Marguerite, and not because someone just tried to take her head off. She doesn't know it yet, but she's his lifemate and he's determined to woo her. It's been over five hundred years since he last courted a woman, but surely the techniques haven't changed. Now if only he can keep her alive—so to speak—so they can have that happily-ever-after.

loved this book, it really brought her books together and revealed allot about all the characters. Great read!!

Margurite is a vampire who is seven hundred years old. Her children are all married and she's striking out on in a new career. She's a private detective and her first case is to find vampire, Christian Notte's mother. She travels to England where someone tried to kill her. Traveling with Christian Notte and his father, Margurite and her partner Tiny follow every lead. Till it takes them to York England where Christian's father Julius and Margurite find they are life mates. But there is more, but you will have to read it to find out. This was a pleasant read. I was a bit disappointed because it didn't have the laughs the other books did. But I was happy that Margurite was finally happy. Who knows maybe Christian's book is in the works.