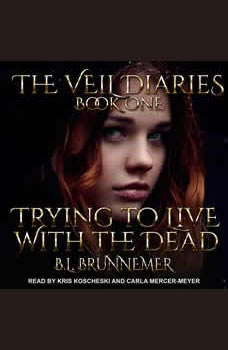 Trying To Live With The Dead

Hi, I'm Alexis Delaney. I'm your average seventeen-year-old girl. Except I can see the dead. And talk to the dead. And push them away and, well, help them move on. So . . . okay, I'm not your average seventeen-year-old girl. For years I've been struggling to survive the souls still roaming around. The shitheads always seem to find me. Moving from town to town every few months never helped either. More dead just always find me. But things are changing for me now. I'm moving in with my uncle Rory and cousin Tara. I'm finally going to be able to do normal teenage stuff I've been missing out on. Right? Well, if this one bitch of a ghost could leave me alone on campus that would be great. Especially since I haven't told my new friends about my abilities. Can you believe this? Five good-looking guys practically adopt me on my first day of school, and I still think they're a bit nuts for it. Now if I can only keep my life with the dead from mixing with my normal life everything would be great. Yeah . . . I don't see that happening either. But I'm going to give it a shot. Who knows? It might work.

Trying To Live With The Dead
Veil Diaries #1

When the Dead Come A Knockin'
Veil Diaries #2