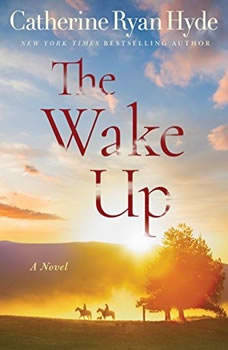 From New York Times bestselling author Catherine Ryan Hyde comes a hauntingly emotional novel of how one man’s life changes forever when he rediscovers his ability to feel the pain of others.Something has been asleep in forty-year-old cattle rancher Aiden Delacorte for a long time. It all comes back in a rush during a hunting trip, when he’s suddenly attuned to the animals around him, feeling their pain and fear as if it were his own. But the newfound sensitivity of Aiden’s “wake up” has its price. He can no longer sleepwalk through life, holding everyone at arm’s length. As he struggles to cope with a trait he’s buried since childhood, Aiden falls in love with Gwen, a single mother whose young son bears a burden of his own.Sullen and broken from his experiences with an abusive father, Milo has turned to acting out in violent and rebellious ways. Aiden can feel the boy’s pain, as well as that of his victims. Now he and Milo must sift through their pasts to find empathy with the innocent as well as the guilty, to come to terms with their deepest fears, and to finally discover the compassionate heart of a family.

On the Duty of Civil Disobedience
by Henry David Thoreau

First published in 1849, this essay argues that individuals have rights and duties in relation to their government. Motivated by his disgust over both slavery and the Mexican-American War, Thoreau argued that individuals must not permit nor enable t...

Five great American short story writers, dating from the turn of the nineteenth/twentieth centuries are represented here. Different in atmosphere and writing style, they nevertheless caught the mood and concerns of the day in a way that was distinct...

Noted transcendentalist Henry David Thoreau spent two years, two months, and two days chronicling his near-isolation in the small cabin he built in the woods near Walden Pond on land owned by his mentor, the father of Transcendentalism, Ralph Waldo ...

New York Times bestselling author Catherine Ryan Hyde returns with an unforgettable story of courage.Seventeen-year-old Ethan Underwood is totally unprepared to search for his father in the Blythe River National Wilderness. Not only is he small, scr...

From New York Times bestselling author Catherine Ryan Hyde comes a moving novel about two strangers who find that kindness is a powerful antidote to fear.Raymond Jaffe feels like he doesn’t belong. Not with his mother’s new family. Not a...

Where do you begin with a writer as original and brilliant as David Foster Wallace? Here--with a carefully considered selection of his extraordinary body of work, chosen by a range of great writers, critics, and those who worked with him most clos...