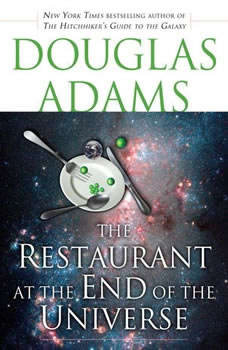 The Restaurant at the End of the Universe

"DOUGLAS ADAMS IS A TERRIFIC SATIRIST."
--The Washington Post Book World
Facing annihilation at the hands of the warlike Vogons is a curious time to have a craving for tea. It could only happen to the cosmically displaced Arthur Dent and his curious comrades in arms as they hurtle across space powered by pure improbability--and desperately in search of a place to eat.
Among Arthur's motley shipmates are Ford Prefect, a longtime friend and expert contributor to the Hitchhiker's Guide to the Galaxy; Zaphod Beeblebrox, the three-armed, two-headed ex-president of the galaxy; Tricia McMillan, a fellow Earth refugee who's gone native (her name is Trillian now); and Marvin, the moody android who suffers nothing and no one very gladly. Their destination? The ultimate hot spot for an evening of apocalyptic entertainment and fine dining, where the food (literally) speaks for itself.
Will they make it? The answer: hard to say. But bear in mind that the Hitchhiker's Guide deleted the term "Future Perfect" from its pages, since it was discovered not to be!
"What's such fun is how amusing the galaxy looks through Adams' sardonically silly eyes."
--Detroit Free Press

Starship Troopers
by Robert A. Heinlein

In one of Heinleins most controversial bestsellers, a recruit in a future world is sent through the toughest boot camp in the Universe to join the Terran Mobile Infantry in battle against mankinds most alarming enemy.Juan Rico signed up with the Fed...

Paul of Dune
by Brian Herbert

"Scott Brick delivers a powerful and entertaining reading reminiscent of a theatrical performance in a brilliant one-man show. Brick's voice is ideally suited to this extraordinary tale; no doubt he studied the prose of each novel to capture the dia...

Life, the Universe and Everything
by Douglas Adams

"HYSTERICAL!"--The Philadelphia InquirerThe unhappy inhabitants of planet Krikkit are sick of looking at the night sky above their heads--so they plan to destroy it. The universe, that is. Now only five individuals stand between the white ...

Bob Arctor is a dealer of the lethally addictive drug Substance D. Fred is the police agent assigned to tail and eventually bust him. To do so, Fred takes on the identity of a drug dealer named Bob Arctor. And since Substance D--which Arctor takes i...

One hundred years before Ender's Game, the aliens arrived on Earth with fire and death. Earth Afire by Orson Scott Card and Aaron Johnston is the story of the First Formic War.Victor Delgado beat the alien ship to Earth, but just barely. Not soon en...