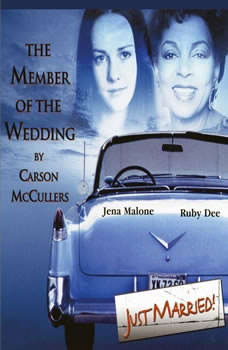 The Member of the Wedding

Gangly, outspoken 12-year-old Frankie Addams yearns to belong to the we of me, and in a Southern kitchen, pours her heart out to the family cook, Berenice. One of the most beautiful plays ever written about loneliness and love. An L.A. Theatre Works full-cast performance featuring: June Angela as Janice and Helen John Cothran Jr. as T.T. Williams Ruby Dee as Bernice Sadie Brown Daniel Henson as John Henry West Victor Mack as Honey Camden Brown Jena Malone as Frankie Addams Lawrence Pressman as Mr. Addams Jacquelyn Riggs as Mrs. West and Doris Tegan West as Jarvis and Barney MacKean Directed by Judyann Elder. Recorded before a live audience at the Skirball Cultural Center, Los Angeles.