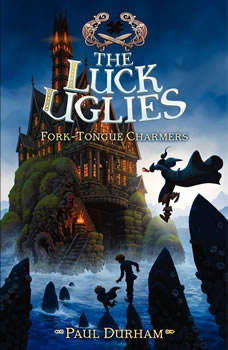 The Luck Uglies must face their greatest enemy in this second installment of the series that's a perfect match for fans of Chris Colfer's Land of Stories series and books by Kelly Barnhill. "There is not a single dull moment in this story. A total delight," raved Bookslist in a starred review!Rye O’Chanter was shocked to discover that her father was the leader of the notorious band of outlaws known as the Luck Uglies. Now she too has been declared a criminal in her own village, and she must flee to the strange and remote Isle of Pest while her father faces off against the Luck Uglies’ bitter rivals, the Fork-Tongue-Charmers, on the mainland.But all bets are off when the battle moves to the shores of Pest. To defeat the Fork-Tongue Charmers, Rye must defy a deranged earl, survive a test meant to judge the grit of the fiercest men, and lead the charge in defending the island against a strangely familiar enemy, which means uncovering some long-buried family secrets….The first Luck Uglies book was named an ALA Notable Children’s Book as well as a New York Public Library Title for Reading and Sharing, and it won the Cybil Award for Middle Grade Speculative Fiction and a Sunshine State Young Readers Award.